An IR Led emitter combined with an IR receiver can make an opto-isolator.
By using an opto isolator we can transfer information between circuits without an electrical connection.
In opto isolators the emitter is always an IR LED.
The receiver can be a photo-diode or a photo-transistor.
Photo transistors are transistors using the base as "light" sensor. When light strikes the photo transistor's base, it will conduct otherwise it will insulate.
Photo-diodes, on the other hand, are semiconductors that produce current flow when they absorb light.
There are two types of photo-diodes the photovoltaics and the photoconductors.
The photovoltaics when they absorb light create a voltage difference between the edges.
Photoconductors are reverse biased photo diodes. When they absorb light the reverse biased resistance will decrease.
Notice that a photo-transistor is nothing else than a reverse biased photo-diode + a normal transistor.

The two kinds of opto isolators :

The dia diagram can be downloaded from here : optoisolators

In ebay you can find pairs of IR Led TX / Photo diodes RX in order to make you own opto isolator.
The problem is that some vendors give away the TX/RX sensors mixed so you don't know which is which.

Let's see how we can detect an IR LED emitter.
The emitter is a normal LED but it's light is invisible to the human eye.

If you have a multimeter that can measure diodes and LEDs, specially if can light up and measure red LEDs then you can detect your IR LED since a red led has a Vd (direct voltage drop) of 1,8 V and a IR Led Vd is around 1V.

A more "universal" way is to measure the direct voltage drop (Vd) with the help of the circuit below : 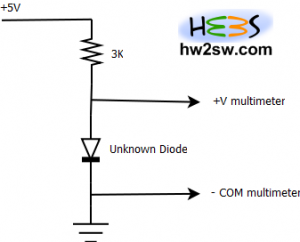 The dia diagram can be downloaded here : CheckDiode

The IR LED emitter should have a Vd = 1Volt .
An IR receiver instead will act as an open circuit so the voltage drop will be 5V in our case with the IR received plugged in.
Notice that with the help of an camera you can "see" the light emitted from an IR Led.

A video demonstration can be found below :

We have seen how we detected our IR Led .
It is now time to test our IR receiver ...